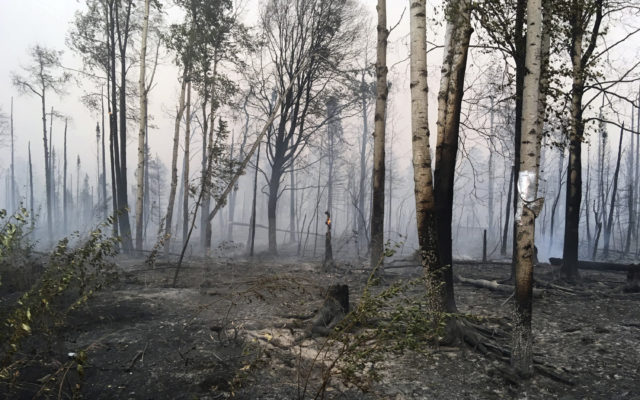 Smoke from wildfires burning both north and south of Anchorage have enveloped Alaska’s largest city in hazy conditions and prompted health warnings about the poor air.

One wildfire about 70 miles north of Anchorage has compelled evacuations and burned about 50 structures. Officials haven’t said how many of those were homes. High winds invigorated the other wildfire that began June 5 about 60 miles south of Anchorage.

The haze has left Anchorage smelling like a campfire and obscured the Chugach Mountains, which normally provide a stunning backdrop to the cityscape. Some pedestrians wore either bandanas or masks to protect their lungs.

Tuesday was the first day of school in Anchorage, and principals and coaches had the discretion of holding recesses or practices inside because of the conditions.

An evacuation order remains in effect for neighborhoods affected by a wildfire on both sides of the Parks Highway north of Willow.

The state Division of Forestry says a dozen engines from Fairbanks and two crews from the Lower 48 will be arriving to boost to the firefighting effort.

The fire began Saturday near Milepost 91 of the Parks Highway when a tree blew onto a powerline, which sparked and ignited dry vegetation.

High wind gusting to 35 mph (56 kph) pushed the fire along the Parks Highway corridor for about 7 miles (11.3 kilometers).

The Division of Forestry estimates that about 50 structures burned.

The highway is open but motorists should expect delays as pilot cars lead vehicles between Mileposts 71 and 99.