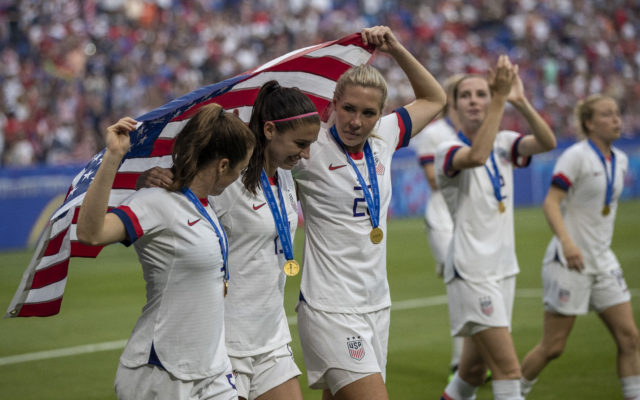 LYON, FRANCE - JULY 07: Kelley O Hara (L-R), Alex Morgan and Allie Long of the USA celebrate following their side victory in the 2019 FIFA Women's World Cup France Final match between The United States of America and The Netherlands at Stade de Lyon on July 07, 2019 in Lyon, France. (Photo by Maja Hitij/Getty Images)

By RONALD BLUM AP Sports Writer
American women’s soccer players want to delay a trial until after an appellate court reviews last week’s decision to throw out their claim of unequal pay while allowing allegations of discriminatory work conditions to move forward. Their lawyers asked U.S. District Judge R. Gary Klausner to enter a final judgment, which would allow them to take the case to the 9th U.S. Circuit Court of Appeals. Players asked Klausner to stay the trial, currently set to start June 16. If Klausner signs the order, a trial probably would be delayed until 2021 at the earliest.