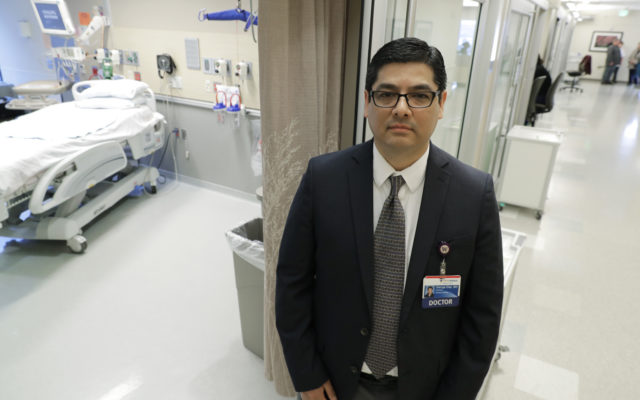 In this photo taken Jan. 23, 2020, Dr. George Diaz, section chief for infectious diseases at Providence Regional Medical Center, poses for a photo in Everett, Wash. Diaz was part of the team that treated the first U.S. patient infected with the new virus from China, who was admitted to the facility on Jan. 20, 2020. The hospital released a statement Monday, Feb. 3, 2020, from the unidentified 35-year-old man that said he has left the hospital and is now in isolation at home, and will be monitored by officials with the Snohomish Health District in coordination with the hospital. (AP Photo/Ted S. Warren)

SEATTLE (AP) – The man who became the first U.S. patient with the new virus from China has left the hospital and says in a statement that he is getting better and looks forward to life returning to normal. The unidentified 35-year-old man’s statement was provided to The Associated Press by Providence Medical Center in Everett, Washington, near Seattle. He fell sick after returning from a visit to China and was admitted on Jan. 20. Health officials say the man is in isolation at home and is being monitored by public health workers.