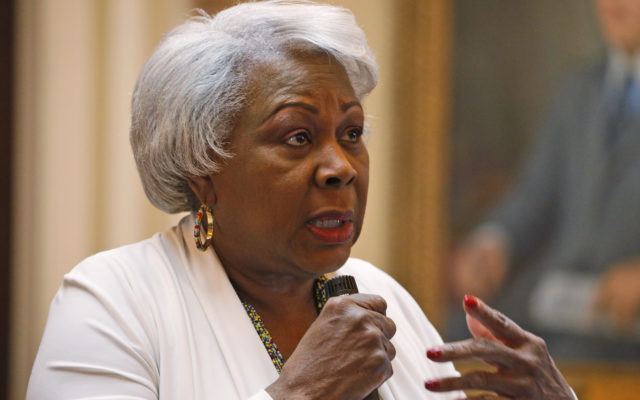 File-Senate President Pro Tempore, Sen. Louise Lucas speaks during a debate on the Senate floor at the Capitol Sunday, March 8, 2020, in Richmond, Va. Lucas, 76, a Black woman and high-ranking Democratic power broker, stood near the 56-foot (17-meter) memorial in the city of Portsmouth. Police said she was with a group of people shaking up cans of spray paint. “(T)hey gonna do it, and you can’t stop them … they got a right, go ahead!” police claim Lucas said. Lucas’s alleged statements are in a probable cause summary police filed last week. Two felony charges say she and several others conspired to damage the 19th Century memorial during a protest. (AP Photo/Steve Helber, File)

PORTSMOUTH, Va. (AP) — A judge in Virginia has dismissed charges against a Black state senator who police said conspired to damage a Confederate monument in the city of Portsmouth. The Virginian-Pilot reports that the charges against Sen. Louise Lucas were dismissed Monday at the request of the city’s top prosecutor. The Commonwealth’s Attorney said the elements of the charges weren’t properly met. Portsmouth’s police department charged Lucas and several others in August. The charges stemmed from a protest in June during which heads were ripped off some of the monument’s statues. One statue was pulled down, critically injuring a demonstrator. Many said the charges against Lucas were political and unlikely to withstand legal scrutiny.