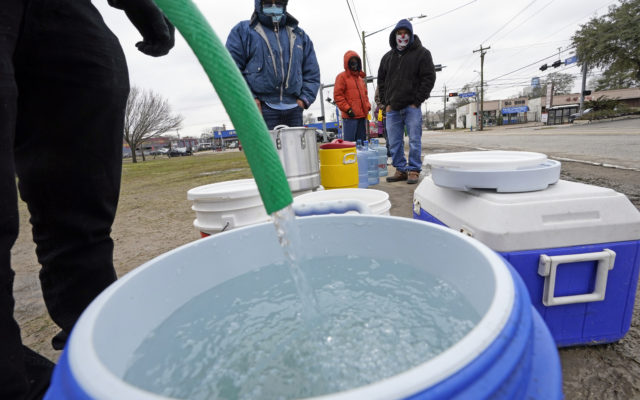 A water bucket is filled as others wait in near freezing temperatures to use a hose from public park spigot Thursday, Feb. 18, 2021, in Houston. Houston and several surrounding cities are under a boil water notice as many residents are still without running water in their homes. (AP Photo/David J. Phillip)

By PAUL J. WEBER and ACACIA CORONADO Associated Press
AUSTIN, Texas (AP) — States slammed by winter storms that left millions without power for days have traded one crisis for another. Broken water pipes brought on by record-low temperatures have created a shortage of clean drinking water, shut down airports and left hospitals scrambling. Many people finally have electricity back after a deadly blast of winter this week overwhelmed the electrical grid and left millions shivering in the cold for days. But now 7 million people in Texas have been ordered to boil their water before consuming it. Nearly all 161,000 residents in Jackson, Mississippi, lost water service. And Memphis’ airport canceled flights due to water pressure issues.