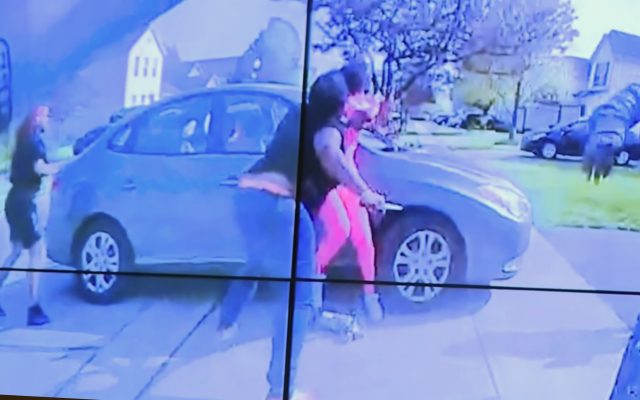 In an image from police bodycam video that the Columbus Police Department played during a news conference Tuesday night, April 20, 2021, a teenage girl, foreground, appears to wield a knife during an altercation before being shot by a police officer Tuesday, April 20, 2021, in Columbus, Ohio. Police shot and the girl just as the verdict was being announced in the trial for the killing of George Floyd. State law allows police to use deadly force to protect themselves or others, and investigators will determine whether this shooting was such an instance, Interim Police Chief Michael Woods said at the news conference. (Columbus Police Department via WSYX-TV via AP)

By FARNOUSH AMIRI Report for America/Associated Press
COLUMBUS, Ohio (AP) — Body camera video shows a Columbus officer fatally shoot a Black teenage girl who swung at two other people with a knife. A black-handled blade resembling a kitchen knife or steak knife appeared to be lying on the sidewalk next to her immediately after she was shot and fell. The girl was identified as 16-year-old Ma’Khia Bryant, according to Franklin County Children Services, which said in a release that she was under the care of the agency at the time of her death. Police say Bryant was taken to a hospital, where she was pronounced dead. It’s unclear if anyone else was injured. The quick release of the footage is a departure from police protocol but comes amid heightened tension between Columbus police and the community they serve.