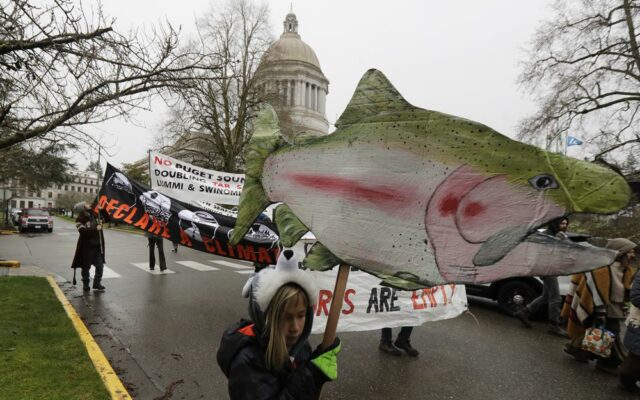 SEATTLE (AP) — The U.S. Department of Commerce’s disaster declaration for certain salmon and crab fisheries in Washington and Alaska opens the door for financial relief as part of an omnibus spending bill being negotiated by U.S. lawmakers.

The declaration Friday covers Bristol Bay king crab harvests suspended for two years, and the snow crab harvest that will be canceled for the first time in 2023. Also covered are 2021 salmon harvests from Alaska’s Kuskokwim River and 2019 and 2020 Washington salmon fisheries, The Seattle Times reported.

Washington’s and Alaska’s congressional delegations can now try to secure funds in the omnibus bill that must pass in order to fund the U.S. government through the fiscal year, which ends Sept. 30. The money would help fishing and crabbing fleets and the communities that depend on them.

“I appreciate all the efforts to speed up this process. The next step is for Congress to act,” said Jamie Goen, executive director of Alaska Bering Sea Crabbers, which is hoping for aid that could top $280 million to the crab industry and communities where the catch is processed.

A Commerce Department disaster declaration, under federal law, can be made for a commercial fishery failure due to causes such as a run failure beyond the control of fishery managers.

Some Washington and Alaska fisheries have been buffeted by marine heat waves that appear to have reduced survival rates for some species, such as the snow crab populations, which collapsed after temperatures spiked in the Bering Sea.

The disaster relief funds would be allocated to the Commerce Department, which would then release the assistance through NOAA Fisheries, the newspaper reported.