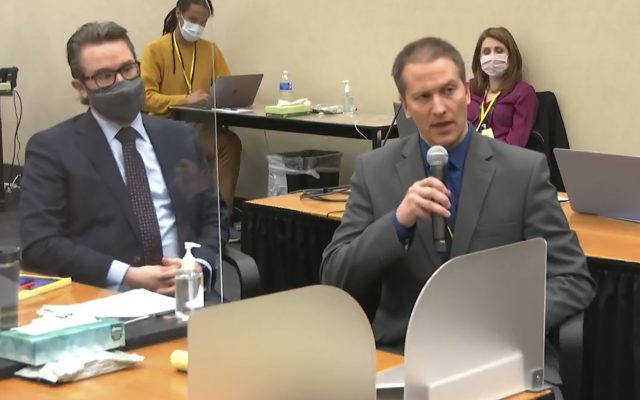 In this image from video, defense attorney Eric Nelson, left, and defendant, former Minneapolis police officer Derek Chauvin address Hennepin County Judge Peter Cahill during motions before the court Thursday, April 15, 2021, in the trial of Chauvin, at the Hennepin County Courthouse in Minneapolis. Chauvin is charged in the May 25, 2020 death of George Floyd. Chauvin told the judge he will not testify on his own behalf. (Court TV via AP, Pool)

By AMY FORLITI, STEVE KARNOWSKI and TAMMY WEBBER Associated Press
MINNEAPOLIS (AP) — The defense at the murder trial of former Officer Derek Chauvin in the death of George Floyd has rested its case without putting Chauvin on the stand, wrapping up after two days of testimony to the prosecution’s two weeks. Chauvin informed the court Thursday that he will not testify, saying he would invoke his Fifth Amendment right not to take the stand. Closing arguments are set for Monday, after which the racially diverse jury will begin deliberating in a city on edge.