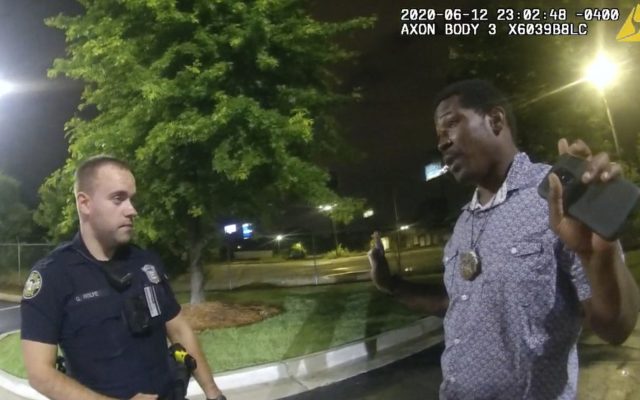 FILE - In this June 12, 2020, file photo from a screen grab taken from body camera video provided by the Atlanta Police Department Rayshard Brooks, right, speaks with Officer Garrett Rolfe, left, in the parking lot of a Wendy's restaurant, in Atlanta. Former Atlanta Police Officer, Rolfe's attorney said Thursday, April 22, 2021, that his client didn't get a chance to defend himself before he was fired for fatally shooting Brooks, a Black man who had been running away from two white officers after he resisted arrest and fired a stun gun at one of them. (Atlanta Police Department via AP, File)

ATLANTA (AP) — The firing of the former Atlanta police officer who’s charged with murder in the shooting death of Rayshard Brooks has been reversed. Garrett Rolfe was fired in June, a day after he shot Brooks in the parking lot of a fast food restaurant. The Atlanta Civil Service Board on Wednesday released its decision on Rolfe’s appeal of his firing. Based on the city’s failure to comply with some provisions of its code and on witness testimony, the board says it concluded Rolfe wasn’t given due process before he was fired.