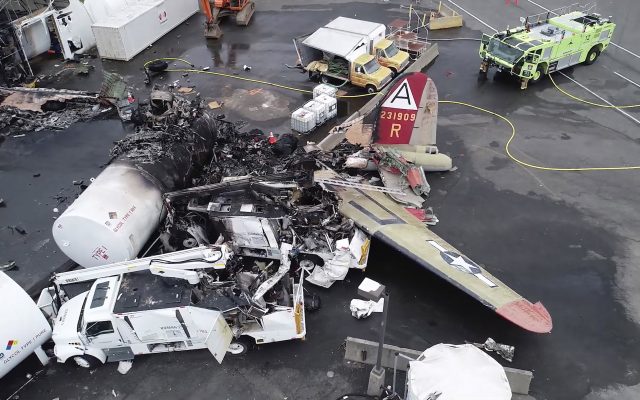 FILE - This file image, taken from an Oct. 3, 2019 video, provided by National Transportation Safety Board, shows damage from a World War II-era B-17 bomber plane that crashed on Oct. 2, 2019 at Bradley International Airport in Windsor Locks, Conn. Pilot error was the probable cause of the 2019 crash that killed seven people and wounded six others, the National Transportation Safety Board said in a report released Tuesday, April 13, 2021, that also cited inadequate maintenance as a contributing factor. (NTSB via AP, File)

By DAVE COLLINS Associated Press
HARTFORD, Conn. (AP) — The National Transportation Safety Board says pilot error probably caused the 2019 crash of a World War II-era bomber in Connecticut that killed seven people and wounded six others. The board released a report Tuesday that also blames inadequate maintenance. Pilot Ernest McCauley reported engine trouble shortly after takeoff. The plane crashed into a maintenance building and burst into flames during a landing attempt. The NTSB says the plane’s landing gear was put down too early and the plane was not traveling fast enough. Plane owner the Collings Foundation did not directly address the findings in a statement.