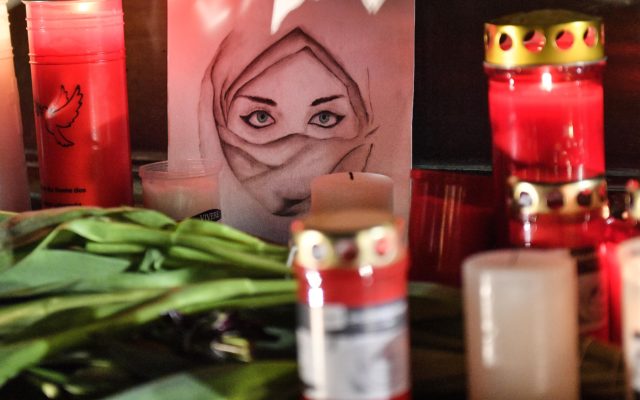 A picture of a woman is seen between candles and flowers at a monument on the market place during a mourning for the victims of the shooting in Hanau, Germany, Thursday, Feb. 20, 2020. A 43-year-old German man who posted a manifesto calling for the "complete extermination" of many "races or cultures in our midst" shot and killed several people of foreign background on Wednesday night, most of them Turkish, in an attack on a hookah bar and other sites in a Frankfurt suburb, authorities said Thursday. (AP Photo/Martin Meissner)

BERLIN (AP) – The gunman who killed nine people in Germany mixed extreme paranoia about secret state surveillance with far-right conspiracy tropes, misogyny and racist vitriol. Authorities quickly pulled down his rambling screeds and videos, which touched on conspiracy theories that have spread from the U.S. Experts say the online ramblings suggest he was influenced by a hodgepodge of paranoid conspiracy theories, including QAnon. But experts say there are differences as well. The German far-right attacker didn’t reference other attacks or perpetrators, extremist memes, or specific groups. Investigators are looking into the attacker’s mental state and whether he had accomplices.