President Biden Says Nation Weary From COVID, But US In A Better Place 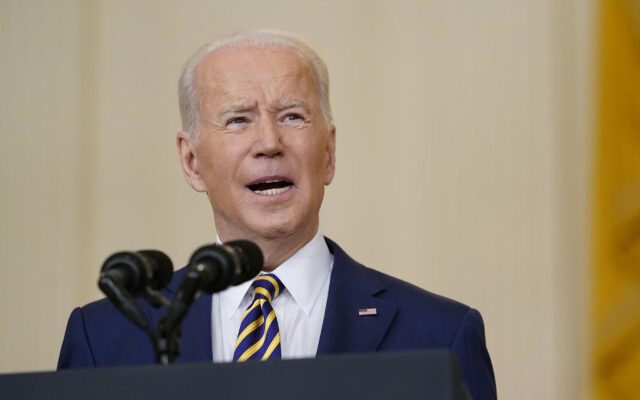 WASHINGTON (AP) — President Joe Biden acknowledged Wednesday that the pandemic has left Americans exhausted and demoralized but insisted at a news conference marking his first year in office that he has “outperformed” expectations. He said he would likely have to settle for “big chunks” of his signature economic package to break an impasse in Congress.

He said he believes important parts will be passed before the 2022 midterm elections and voters will back Democrats if they are fully informed — an assignment he said he will pursue by traveling the country.

The president began the news conference by reeling off early successes on coronavirus relief and a bipartisan infrastructure deal. But his economic, voting rights, police reform and immigration agenda have all been thwarted in a Democratic-controlled Senate, while inflation has emerged in the past year as an economic threat to the nation and a political risk for Biden.

Despite his falling approval numbers, Biden claimed to have “probably outperformed what anybody thought would happen” in a country still coping with the coronavirus.

“After almost two years of physical, emotional and psychological impact of this pandemic, for many of us, it’s been too much to bear,” Biden said. “Some people may call what’s happening now ‘the new normal.’ I call it a job not yet finished. It will get better.”

Still, it is a perilous time for Biden: The nation is gripped by another disruptive surge of virus cases, and inflation is at a level not seen in a generation. Democrats are bracing for a potential midterm rout if he can’t turn things around.

Biden has held just six solo news conferences during his first year in office. The ongoing threat from the coronavirus was evident in the very setup of Wednesday’s gathering: A limited number of reporters were allowed to attend, and all had to have been tested for the virus and wear masks.

The enduring impact of COVID-19 has become a weight on Biden’s presidency, despite his best efforts to rally the country in common purpose to defeat the virus. As a candidate, he promised to restore normalcy to a pandemic-riven nation, but overcrowded hospitals, shortages at grocery stores and fierce divisions over vaccine mandates and face mask requirements abound.

On the Senate floor, meanwhile, Democrats are on track to lose a vote to change the chamber’s rules in order to pass voting reform legislation due to the opposition of Democratic Sens. Kyrsten Sinema of Arizona and Joe Manchin of West Virginia. That will underscore the constraints on Biden’s influence barely a week after he delivered an impassioned speech in Atlanta comparing opponents of the measures to segregationists and exhorting senators to action.

And just a month ago, Manchin blocked Biden’s roughly $2 trillion legislation aiming to address climate change, reduce child poverty and expand the social safety net, paid for by new taxes on the wealthy. That bill, which contains much of what Biden hopes will form an enduring domestic legacy, is now on the back burner as Democrats await guidance from Biden on how to proceed.

The bill was once viewed as a catch-all home for various progressive priorities, but now Democrats are sensing the need to deliver another accomplishment to voters in the midterm year and are beginning to come to terms with a slimmed-down package that can overcome Manchin’s reticence.

Senate Democratic whip Dick Durbin encouraged Biden to be “honest and realistic” in his comments to Americans, particularly about the harsh realities of what’s possible in a 50-50 divided Senate where any one lawmaker can block Biden’s agenda.

“We have to have an agenda that is not only appealing to the voters, but is realistic on Capitol Hill,” Durbin, D-Ill., told reporters Tuesday. “It’s OK to have an ambitious agenda, but it has to come down to the harsh reality of producing votes.”

Recent Democratic presidents have engineered course corrections in their first terms after suffering rebukes in the midterm elections. President Bill Clinton shifted in a more moderate direction after getting thumped in 1994; President Barack Obama was forced to recalibrate after acknowledging he’d gotten “shellacked” in the 2010 midterms.

Biden, for his part, is signaling he’s not ready for a major shift in direction after recent policy setbacks. Instead, his White House is promising dogged work to deliver on promises made.

His words will be closely analyzed both at home and abroad, as the U.S. seeks to rally an international coalition to defuse a perilous situation in Eastern Europe.

“We’re now at a stage where Russia could, at any point, launch an attack in Ukraine,” Psaki said Tuesday, reiterating that the U.S. and its allies would impose stiff economic penalties on Russia if it seized any more Ukrainian territory.