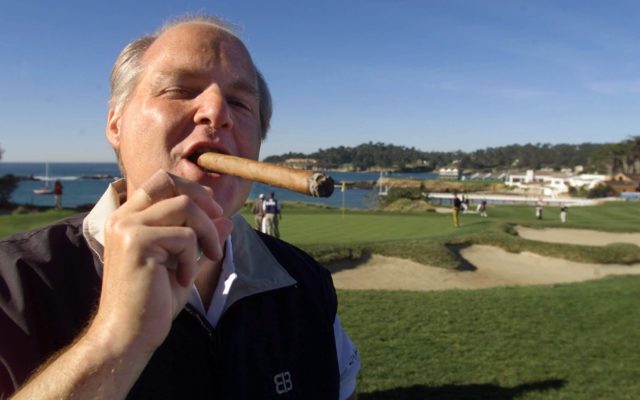 Talk show host Rush Limbaugh puffs on his Ashton VSG cigar while waiting to tee off from the fifth tee of the Pebble Beach Golf Links during third round play of the AT&T Pebble Beach National Pro-Am in Pebble Beach, Calif., Saturday Feb. 3, 2001. In the background is the fourth green.(AP Photo/Eric Risberg)

By MATT SEDENSKY Associated Press
Rush Limbaugh, the talk radio host who became the voice of American conservatism, has died. His death Wednesday at the age of 70 came after a lung cancer diagnosis. With his three-hour weekday radio show broadcast on nearly 600 stations across the U.S., and a massive audience of millions hanging on his every word, Limbaugh’s rants shaped the national political conversation, swaying the opinions of average Republicans and the direction of the party. Donald Trump awarded him the Presidential Medal of Freedom, the nation’s highest civilian honor.