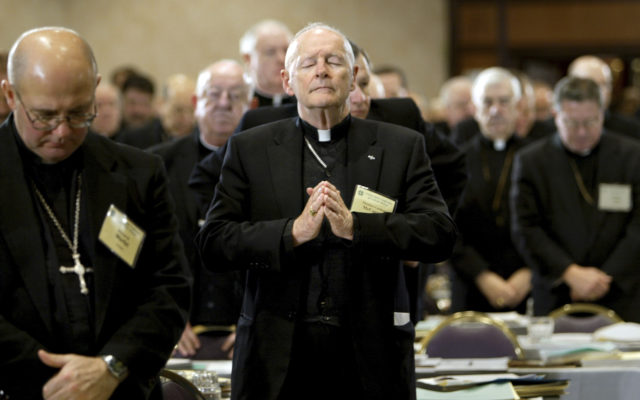 FILE - In this Nov. 10, 2003 file photo, Cardinal Theodore Edgar McCarrick, Archbishop of Washington, D.C., center, joins his fellow clergy in prayer at the end of the opening session of the U.S. Conference of Catholic Bishops meeting in Washington. On Tuesday, Nov. 10, 2020, the Vatican is taking the extraordinary step of publishing its two-year investigation into the disgraced ex-Cardinal McCarrick, who was defrocked in 2019 after the Vatican determined that years of rumors that he was a sexual predator were true. (AP Photo/J. Scott Applewhite, File)

By The Associated Press undefined
The bishop of the New Jersey diocese of Metuchen, which was headed by Theodore McCarrick when it was established in 1981, says he is “disgusted and appalled” by the sex abuse scandal involving the ex-cardinal. James Checchio says that “while I am grateful to Pope Francis for ordering this study to arrive at the ‘truth’ of what happened, like everyone else, I am disgusted and appalled by what has taken place.” He adds that the Vatican’s report on its McCarrick investigation “will, undoubtedly, cause sadness, anxiety, frustration, anger, disgust and pain.” Checchio says that since implementing new abuse prevention policies in 2002, the diocese has not received a single credible complaint of abuse.