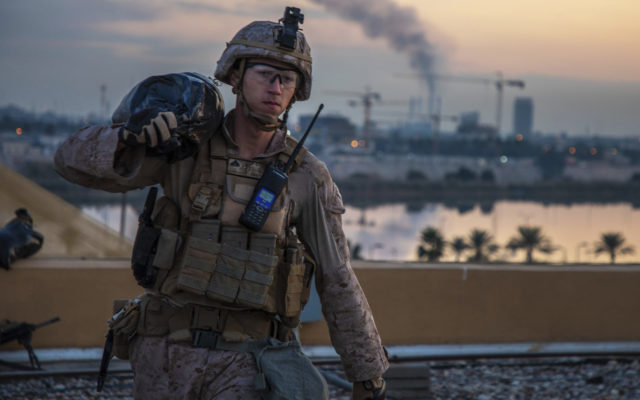 In this Saturday, Jan. 4, 2020, photo, released by the U.S. military, a U.S. Marine with 2nd Battalion, 7th Marines that is part of a quick reaction force, carries a sand bag during the reinforcement of the U.S. embassy compound in Baghdad, Iraq. (U.S. Marine Corps photo by Sgt. Kyle C. Talbot via AP)

WASHINGTON (AP) – Top Pentagon leaders say the United States has no plans to withdraw troops from Iraq, despite a draft letter from a senior military officer that appeared to suggest preparations for withdrawal were underway. Gen. Mark Milley, chairman of the Joint Chiefs of Staff, told reporters the U.S. is “moving forces around” Iraq and neighboring Kuwait. He says a draft letter circulated internally by a U.S. Marine commander was a “poorly written” honest mistake that should never have gotten out.