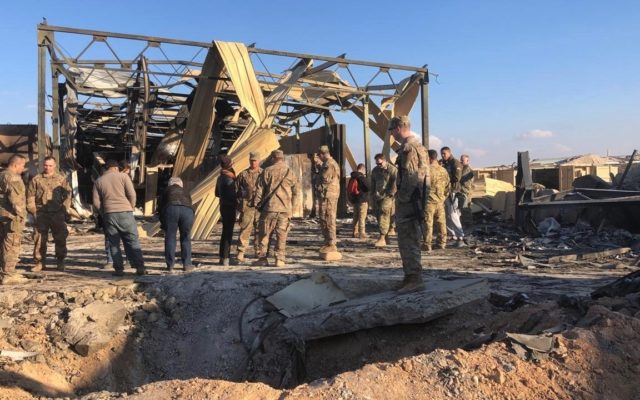 U.S. Soldiers stand at a site of Iranian bombing at Ain al-Asad air base in Anbar, Iraq, Monday, Jan. 13, 2020. Ain al-Asad air base was struck by a barrage of Iranian missiles on Wednesday, in retaliation for the U.S. drone strike that killed atop Iranian commander, Gen. Qassem Soleimani, whose killing raised fears of a wider war in the Middle East. (AP Photo/Qassim Abdul-Zahra)

AIN AL-ASAD AIR BASE, Iraq (AP) – U.S. officials say American troops were informed of an impending attack hours before a barrage of Iranian ballistic missiles struck their air base in Iraq. An officer at Ain al-Asad air base described giving an order for troops to go on lockdown and later into bunkers before the missiles struck early on Jan. 8. Officials said no U.S. troops were killed or injured, although one officer said several were treated for concussions. An Associated Press crew touring base saw large craters and damaged military trailers and housing units. The attack was in retaliation for the U.S. drone strike near Baghdad airport that killed a top Iranian commander, Gen. Qassem Soleimani on Jan. 3.